Saved Searches Advanced Search
Returned materials are quarantined for a minimum of 5 days. No overdue fines are charged during this period.
The Library buildings are closed to the public but we are here to assist you. Our new contactless checkout/pickup service is now available.
Print 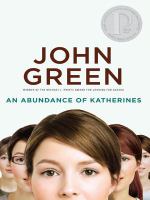 An Abundance of Katherines

When it comes to relationships, Colin Singleton’s type is girls named Katherine. And when it comes to girls named Katherine, Colin is always getting dumped. Nineteen times, to be exact. On a road trip miles from home, this anagram-happy, washed up child prodigy has ten thousand dollars in his pocket, a bloodthirsty feral hog on his trail, and an overweight, Judge Judy-loving best friend riding shotgun -- but no Katherines. Colin is on a mission to prove The Theorem of Underlying Katherine Predictability, which he hopes will predict the future of any relationship, avenge Dumpees everywhere, and finally win him the girl. Love, friendship, and a dead Austro-Hungarian archduke add up to surprising and heart-changing conclusions in this ingeniously layered comic novel about reinventing oneself.
Publisher: New York : Speak, 2008.
ISBN: 9781436269551
1436269555
9781440629792
144062979X

John Green is pretty good, but I don’t think that this is one of his finest books. For me the book went pretty slow, but some parts did catch your attention. I think for me there wasn’t really a plot, and there was too much math. But I definitely loved those quirky characters.

Not John Green's best novel but still really nice. It's a light read with charming prose and lovable characters. Although not in the first person like many of John Green's books, it still feels like the narrator has a personality, in part because of the quirky footnotes.

Cool, quick, light, easy read. Well, easy if you skip the maths, which you totally can. Quirky characters do a road trip and meet some quirky characters. I enjoyed it.

I read this for the "a book with a character sharing your name " part of my 2018 reading challenge. I didn't love it, I was annoyed for the first 3/4 then it picked up a bit at the end. Apparently not a lot of books have a "Lindsey".

Although it doesn't compare to "The Fault in Our Stars" it still generated enough curiosity to finish the book. Like all the other John Green books it has a plot that I definitely don't see everyday. And also has a romance that you secretly root for.

Meh.
John green is one of my all time favourite authors, but an abundance of katherines? Well it did not live up to my “green” expectations.
Basically every John green book had some thing important at stake. In the fault in our stars it was life as well as youth, in paper towns it was Margo Roth speiglman aka love,
In looking for Alaska, it was the need to remember.
But in “abundance of katherines” it had too much at stake, while not adding suspense to the story.

This was my least favourite book by John green.

I opened this book with great enthusiasm, and closed it with disappointment. John Green is a absolutely amazing author, but this book isn't far as well written as The Fault in Our Stars. I think mainly there wasn't much plot and too much math.

The narrator is a little nerdy and totally relatable to all the bookworms out there!

This book was well written in most parts, but very confusing storyline I couldn't grasp onto. John Green's books are usually very good. This one was just OK.

Abundance of Katherines by John Green was an interesting read. I decided to read this novel over the March break, and I had a great time. I thought the book was relatable in a way because it focuses on the life of teenagers, and their struggles to understand relationships. I really liked the plot of the novel, but it did not really live up to what I was expecting. For example, the first John Green book I ever read was The Fault in Our Stars, and that is honestly one of the most emotional and pure novels I have ever read. With that said, I don’t think I liked Abundance of Katherines that much because I was expecting it to be as great as some of Green’s other novels. I would recommend this novel to teens/preteens who are looking for a casual read, but it wasn’t really the best book I have read! Rating:3/5 @Montgomery of the Teen Review Board at the Hamilton Public Library

I don't even know why I gave this book such a high rating but we shall leave it there for now. I may probably be dense or a bit shallow, but I really didn't see the logic behind this whole book. It made absolutely no sense to me. At all. First, how does one end up having sixteen ex-girlfriends? Especially when the protagonist is a brainiac (nerd) who has literally the most weirdest of thoughts and processing in all humans, ever? In addition, how do you possibly even know sixteen different girls with the same exact name? And happen to like and date all of them? Especially, since the protagonist isn't really the most social person at all? To me, that is almost a bit creepy. Almost like in those serial killer stories where the murderer does something to specific girls, or leaves his own signature behind. The good parts of this book however, were the parts with the girl not named Katherine. 3.5/5
- @Siri of the Teen Review Board at the Hamilton Public Library

This book is one of my favourites. I love how this novel is written and I have never read a story quite like this one before. Reading this book made me feel very intelligent, and I learned some fun facts throughout the novel. John Green is an incredible author, and this book is a wonderful example of his talent. This is an excellent story, and a great book to read, no matter what mood you are in. Overall, I would recommend this novel to anyone. I would rate this book 4/5.
- @potterhead of the Teen Review Board at the Hamilton Public Library

An Abundance of Katherines was a hilarious and fun filled adventurous book. Colin, a child prodigy, thought he was a failure after the ninetieth Katherine dumped him (This time she broke his heart). Let me fill you in with the details; Colin is interested in girls only with the name Katherine, but all nineteen of them dumped him. So he decided to go on a road trip with his beat friend Hassan to get better, and Hassan agreed to his parents that he would get a job. As Colin obsesses over his break up... You will find out the rest if you read the book. This is one of my favorite books. It was so comedic and so true to how teens stress over things. I rate this book 3 and a 1/2 stars out of five.
- @SDJ of the Teen Review Board of the Hamilton Public Library

"You can love someone so much. But you can never love people as much as you can miss them."

"Sticks and stones may break my bones, but words will never hurt me. What a dirty lie."

"I love you so much and I just want you to love me like I love you."

"Dude, if Kentucky is going to remind you of Paris, we're in a hell of a pickle."

"Yeah. God. We could, couldn't we? We could just keep going."
--Lindsey Lee Wells

(Part 2) But there’s another way. There are stories. Maybe stories don’t just make us matter to each other – maybe they’re also the only way to the infinite mattering he’d been after for so long. Say I tell someone about my feral hog hunt. Even if it’s a dumb story, telling it changes other people just the slightest little bit, just as living the story changes me. And that infinitesimal change ripples outward – every smaller but everlasting. I will get forgotten, but the stories will last, and so we all matter – maybe less than a lot, but always more than none. And it wasn’t only the remembered stories that mattered. There’s a place in the brain for knowing what cannot be remembered.
That brief walk – from the screened-in porch outside to the Hearse – was one of those moments he knew he’d remember and look back on, one of those moments that he’d try to capture in the stories he told. Nothing was happening, really, but the moment was thick with mattering.

(Part 1) Collin all of a sudden realized: you can make a Theorem that explains why you won or lost past poker hands, but you can never make one to predict future poker hands. The past is a logical story. It’s the sense of what happened. But since it is not yet remembered, the future need not make any sense at all.
In that moment, the future stretched out before Colin: infinite and unknowable and beautiful.
Collin’s brain was spinning with the implications: if the future is forever, then eventually it will swallow us all up. Even Colin could only name a handful of people who lived, say, 2,400 years ago. In another 2,400 years, even Socrates, the most well-known genius of that century, might be forgotten. The future will erase everything – there’s no level of fame or genius that allows you to transcend oblivion. The infinite future makes that kind of mattering impossible.

Okay, here’s the thing about storytelling: you need a beginning, and a middle, and an end. And you need a good, strong moral. Or a theme or whatever. And the other thing is romance and adventure. You’ve got to put some of those in. If it’s a story about peeing into a lion cage, give yourself a girlfriend who notices how gigantic your winky is and then saves you from the lion at the last second by tackling you, because she’s desperate to save that gorgeous, ginormous winky. In the beginning, you need to pee; in the middle, you do; in the end, through romance and adventure, your winky is saved from the jaws of a hungry lion by the pluck of a young girl motivated by her abiding love for giant winkies. And the moral of the story is that a heroic girlfriend, combined with a giant winky, will save you from even the most desperate situations.

"The morning after noted child progidy Colin Singleton graduated from high school and got dumped for the nineteenth time by a girl named Katherine, he took a bath."

bigcoweye thinks this title is suitable for 14 years and over

RobertELPL thinks this title is suitable for 14 years and over

cutelion918 thinks this title is suitable for 10 years and over

Bookcat18 thinks this title is suitable for 12 years and over

ekimber thinks this title is suitable for 13 years and over

violet_elephant_757 thinks this title is suitable for 12 years and over

bellacrysler thinks this title is suitable for 13 years and over

ElainaL thinks this title is suitable for 13 years and over

white_cheetah_89 thinks this title is suitable for 11 years and over

Colin is a child prodigy, but that doesn't stop him from making the same mistake, falling for girls named Katherine. Colin's parents want him to get out of the house and so he and his friend, Hassan, go on a road trip. Many adventurous and funny moments occur throughout their spontaneous journey. Will Colin break his bad habits of dating Katherine's? Or is his doomed to repeat this mistake of the past?