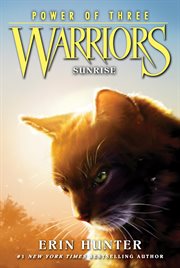 There will be three, kin of your kin . . . who hold the power of the stars in their paws. A mysterious murder in the ranks has ripped ThunderClan apart. But more secrets still remain to be discovered. Jayfeather is determined to find out who his real parents are. But he'll have to trample through a forest of lies in order to uncover the truth. Hollyleaf is shocked by her Clan's disobedience of the warrior code, and distraught enough to strike out at someone she's always admired. And Lionblaze must bear horrified witness to events that will change everything he believes. In the harshest days of leaf-bare Clanmate turns upon Clanmate, danger lurks behind familiar faces, and one more warrior may be lost forever. . .
Publisher: [United States] : Harper Collins Publishers, 2009.
ISBN: 9780061906060
0061906069

Some content below may have been reported by users for containing spoilers or offensive content. Learn More

warriors is a awesome book series read it now

hollyleaf, amazing!!!
i love how she kills ashfur!! (not that i hate ashfur or anything)
i like how she goes against the code tho do what she believes is right, and then risks her place in thunderclan by telling the truth. go girl!! love u hollyleaf
also i like the way the book kinda ends on cliffhanger, like what r we gonna do now that holyleafs gone and what about the prophecy?

so sad that hollyleaf wasnt the forth cat and it was firestar instead. and the sacrifice for ivypool wasnt built up well, all it is was ivypool thinking, i kind of like hollyleaf. it would be more emotional and more convincing if they became good friends. and i dont like how they brought her back. i think it would have been better if she decided to go back by herself and just... showed up.

I love warriors but this book was well...ok
people underestimate lionblaze but he is so great! out of the three he is my favorite.
don't get me wrong I love jayfeather too but not hollyleaf I can see why some people like her she does have her good qualities. I just don't like her because she killed ashfur and she is just kinda annoying. I love jayfeather and lionblaze! I totally ship breezepelt and heathertail! I am I the only one?
but this is my favorite book series!
and wings of fire
among many others!

This book was pretty amazing! over all, I loved it but some parts were extremely sad and I was tearing up at the end. Read with caution!

Wow. A very thrilling, shocking conclusion to the Power of Three series.

AshFur was my favourite character :( i hate u holly leaf why.......

Thanks everyone for spoiling the whole book. Why does every book and movie have spoilers. Do I have to give another pep talk, cause I think I do, don't people even care that they are ruining the book for other people :(
Anyways, this was a great book, with unexpected twists and turns that kept me always wanting more. I love Warriors!

Just to let you know, You can judge THIS book by it's cover. With eerie trees, and a chilly background, you know it's going to be dark... And It is

(Can you guess what cat will be in the middle of all this? HINT: Who is the cat in the cover?)

Of most of the covers in the series, this one is definitely one scary cover. With the title being sunrise, the plot is ironically darker and eerie. Hollyleaf learns many secrets and confronts others, only to be faced with betrayal. Jayfeather squares off with truth, but sometimes it is best not to dig up lies that only create more hurt. Lionblaze realizes he needs to conquer different forms of weakness, mentally and physically. With the book ending in a bitter/dramatic loss and perhaps, a new hope, readers will not hesitate to jump right into the Omen of The Stars.
- @Siri of the Teen Review Board of the Hamilton Public Library

arabellaskindle thinks this title is suitable for 7 years and over

cassie8 thinks this title is suitable for 10 years and over

swagspops thinks this title is suitable for All Ages

sage_cat thinks this title is suitable for All Ages

brown_owl_82 thinks this title is suitable for All Ages

mzarina thinks this title is suitable for 10 years and over

kortiny thinks this title is suitable for All Ages

sjanisse thinks this title is suitable for All Ages

“His words are nothing more than mist and sunshine, impossible to hold down.”

"Please know that I tried my best, I regretted what I had done with every single breath," her voice cracked on the last word, and she paused, swallowing, before she continued. "But I couldn't regret having my kits. They're fine cats, and I will always be proud of them."
- Page 307
P.S. This is not a spoiler 'cause I didn't say who was actually saying the quote!

"A gleam of some emotion that Hollyleaf couldn't read woke in her mother's eyes. 'Hollyleaf,' Leafpool meowed. 'I have lost my kits, the one cat I loved, and my calling as a medicine cat. Which do you think would be easier for me, to die or to go on living?'" Leafpool

"Then he glimpsed them crouched together under a bush, and heard Crowfeather meow, 'Come away with me Leafpool. I'll take good care of you, I promise.'" Jayfeather watching Crowfeather's memories.

"Leafpool is your mother, but I want to say that I couldn't have loved you more if I had given birth to you myself. We raised you together, and surely that's what matters." Squirrelflight
Love this one!

"He creeps me out." Birchfall

"There will be three, kin of your kin...Cloudtail is Firestar's kin, Whitewing is Cloudtail's daughter, and now Dovekit and Ivykit... Don't you see? The prophecy isn't over! We aren't the only kin of Firestar's kin. It doesn't matter which one of Whitewings kits is the one. There are still three of us!" Jayfeather

"That's what absolute power is. Controlling every cat in the territories by the lake!"-Sol

*Note, contains spoilers if you haven't read the rest of the series.*The 6th and final book of the "Power of Three" series of the "Warriors" books. Murder has torn Thunder Clan apart. Hollyleaf starts to wonder if the Warrior Code has as much meaning as she once believed, Lionblaze is caught up with his dealings with the Clans old enemy, Tigerstar, and Jayfeather is determined to find out who their real parents are. But the truth may not be as satisfying as they may think.

The 3 have discovered CrowFeather of WindClan and LeafPool are their parents. HollyLeaf is AshFur's murderer. She reveals her real parents at a Gathering. HollyLeaf flees into the tunnels, which collapse over her. JayFeather and LionBlaze find out HollyLeaf was not one of the 3. They realize that either DoveKit or IvyKit, will be the 3rd cat in the prophecy. And, Brambleclawx, DoveKit and IvyKit's mother is WhiteWing, not PoppyFrost!!!!!!!

Jayfeather, Lionblaze, and Hollyleaf finally discover the identity of their real parents: Leafpool and Crowfeather. Hollyleaf is discovered to have been the cat who murdered Ashfur, and reveals her parents at a Gathering. Brambleclaw then hates Squirrelflight, and Leafpool steps down as medicine cat. Hollyleaf runs away, tries to force Leafpool to eat deathberries, then attempts to escape through the underground tunnels, which collapse over her. Jayfeather and Lionblaze realise that eaither Dovekit or Ivykit, daughters of Poppyfrost will be the third cat in the prophecy.