Saved Searches Advanced Search
Returned materials are quarantined for a minimum of 5 days. No overdue fines are charged during this period.
The Library buildings are closed to the public due to COVID-19 but we are here to assist you. Our new contactless checkout/pickup service is now available.
Print 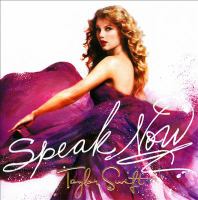 The third album from the Country/Pop superstar, "Speak Now" is the follow-up to her multi-million-selling 2008 album, Fearless. The 21-year-old singer/songwriter wrote the entire album on her own and co-produced with longtime collaborator Nathan Chapman, who worked with her on Fearless and her 2006 self-titled debut. Features the single 'Mine'.
Publisher: Nashville, TN : Big Machine, p2010.
Branch Call Number: CD POPULAR SWIFT SN
Characteristics: 1 sound disc (67 min.) : digital ; 4 3/4 in.

I used to love this album but not so much anymore. I feel like some of the songs don't fit with my moral values now that I've had some life experience but there are still some that I adore, Enchanted being one of them.

Just like cbailey13 below this album is the epidemy of my high-school years. Almost every song has some sort of relation to a real-life season or event. I love it!!!! Taylor Swift did such an incredible job!!! I love listening to this album over and over and over again, making me feel like someone else has been in the exact same shoes as I. :) :) A must listen!

The album that defined my high school year, especially sophomore year when it came out. It was the first album I ever pre-ordered and I was non stop with it. The album has hints of country, but it is the start of Taylor's transformation into more of a pop music star. "Story of Us" even made it into my Spottily top 100 for 2018!

I love the songs on this CD, especially 'Speak Now' and 'Sparks Fly'! Of course I've always been a huge Swiftie! Even if this isn't my fave album it's still fabulous.

Speak Now is a full length studio album released by very talented singer songwriter Taylor Swift back in 2010. Consisting of fourteen songs, this album very much consists of that "classic Taylor", in sound. It has a country with a subtle pop rock vibe, and is very angsty. The songs on this album discuss very "teenage" viewpoints of love and its difficulties. Some songs I would recommend are "The Story of Us", "Enchanted", and "Sparks Fly". This album definitely has left a mark in Taylor Swift's career that can not be forgotten, and bring about a very nostalgic feeling with them. 3.5 Stars
@Ruby_Tuesday of the Hamilton Public Library's Teen Review Board

5/5 stars Taylor Swift’s third album, Speak Now, is known to be entirely written by her and contains some of her longest songs to date. This is my second favourite album by her because of the mixture of country and pop that she puts into her music, and the knowledge that she actually wrote all the songs by herself, without any helpers, is inspiring. My favourite tracks are Long Live, Last Kiss, Enchanted, Ours (deluxe edition) and the acoustic version of Haunted. Each song has its own flare and uniqueness, but the album also shows off Taylor’s songwriting ability. It helped her to become known as one of the greatest songwriters of all time and is the beginning of her success in the music industry. On this album she is able to show off her vocal range that many people believed she didn't have, especially in the acoustic version of Haunted, and while she did gain criticism for her change in musical direction, no one can deny the work that was put into the album and how, at the age 20, Taylor Swift became one of the most known singers of our generation and the 21st century.
@SeraphinaWilliams of the Hamilton Public Library Teen Review Board

Taylor Swift’s music has always been very real, emotional, and relatable. Her album “Speak Now” stays true to that fact. The style here sounds a little bit different from her older albums, but is still enjoyable for any Swift fan. I think that this album is perfect for teenagers who are growing up and feeling a bit confused and nostalgic. Some notable songs off this album include Never Grow Up, Sparks Fly, and Story of Us. I would definitely recommend this to teens and Swift fans. Rating 4.5/5 stars
- @reginaphalange of the Teen Review Board at the Hamilton Public Library

Speak Now by Taylor Swift was her third studio album released worldwide a few years ago. I found it was the first album that officially swayed from her 'country' vibes and starting getting more into the modern day pop. Although a few songs still possessed her previous country influence, it was mostly a pop-like album. I found the album flowed nicely, with Swift playing the role of a 'scorned lover' in most of her songs. Songs like 'Mine', 'Sparks Fly' and 'Back To December' had you hooked and were incredibly catchy tunes. Although there were certain parts where I found a lot of the songs were very identical to one another and did not sway much in the similarity aspect. Especially in songs like 'Speak Now' and 'Sparks Fly' as the lyrics may be different, but the tune was very similar. Although it had its bad parts I did find that this album truly solidified Taylor Swift's position as a modern day icon. Speak Now truly stuck to its emotional appeal when it came to love and heartbreak and it truly makes you feel bad for the person the music was written about. Overall, I really enjoyed the album. I'd rate it 3.5/5.
@NemoReads of the Teen Review Board at the Hamilton Public Library

I really loved this Taylor swift album a lot! I love all the songs on this album. I love you Taylor swift! :)

The story of us seems more like a tragedy now

"Something leaves me holdin' on to nothing"

“National honor is the national property of the highest value.” -James Madison

One day we will be remembered.
- from Long Live

I have this really high priority on happiness and finding something to be happy about.

minayang thinks this title is suitable for All Ages

blue_owl_398 thinks this title is suitable for All Ages

whitestripeslovr thinks this title is suitable for All Ages

fearlessforever thinks this title is suitable for 11 years and over

phuong_nguyen00 thinks this title is suitable for 12 years and over

erinedmonton thinks this title is suitable for All Ages

There are no summaries for this title yet.