Saved Searches Advanced Search
Returned materials are quarantined for a minimum of 5 days. No overdue fines are charged during this period.
The Library buildings are closed to the public but we are here to assist you. Our new contactless checkout/pickup service is now available. 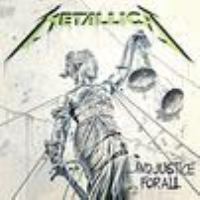 And Justice for All

The remaster is nice and some of the live songs I hadn't had before. The demos were just ok.

.
As someone not into heavy metal, I consider this and The Black Album to be just slightly below the perfection that is Master of Puppets. Great music and meaningful lyrics. Metallica still at their peak of creative energy!
.
I can't comment on all the demos and extras included in this version.
Usually I hate all that stuff.
.

Although the band had much success with their previous 3 albums, "Justice" would be the on that put them on the radio and MTV with the unlikely hit "One". The song was a 7 minute plus tour de force based on the novel "Johnny Got His Gun". An unlikely hit for sure, but a song that was all over MTV and rock radio in 1988. Along with the previous album "Master Of Puppets", this would be the band's most progressive metal oriented recording. All of the songs clock in above the 5 minute mark with lengthy instrumental passages and epic lyrics and song structure. "Justice" also marked the first recording after the tragic death of original bassist Cliff Burton. The rage and sorrow at his loss is evident throughout this album. On the downside new bassist Jason Newstead is constantly buried in the mix on this one to the point where his contributions are almost non-existent. The drum sound on this album is also rather "light" even though Lars performance is fantastic. I think this album could really use a good remastering and it would come across much better. The material on this one is all top notch Metallica. For me there is not a weak track in the bunch and shows the band at the absolute top of their game. If this is not Metallica's best album it surly resides in the top 3 of their career. Yea it's sometimes overblown and pretentious, but to a progressive rock fan like me this is all icing on the cake.

The growling and barking of the singer makes comprehending what they are saying impossible. The music itself is, with a couple of exceptions, fast, loud, and harsh.

I admit. The music came first for me listening to Metallica before the lyrics. So when I read the cd jacket with the lyrics, I was surpised and amazed how deep and dark their lyrics were. It made me love the band even more.